There we are. The blue dot. Ugh. Amazing lack of good internet capabilities. Looks like we’re in outer space, at night.

Trixie and Dax were due for a couple of their routine shots, and we wanted to get those taken care of before we went back into Canada. We’d called the Freeport Veterinary Clinic the day before, explained our travel situation, and got an appointment for this morning.

This turned out to be a really nice clinic, with a great vet and staff. Trixie and Dax seemed to enjoy meeting these new people and getting some special attention. And now, no worries about going back to Canada!

Our only worry now, was the crazy driver next to us as we drove out of town. This was a first on my “Can’t believe I saw a person doing such and such while driving” list. OK, this guy was driving while eating, with chopsticks, from a Chinese food take-out container. Scary at first, and then total excitement and wonderment about how the heck he could do that while driving! Talent comes in many forms!

We were headed towards Rockland, where we were hoping to have dinner at a restaurant called Primo. This was another recommendation from Gary and Jane. We were super disappointed to find out that Primo is closed on Tuesdays. Bummer, but then, look at the money we probably saved by not being able to eat out. Silver linings come in many forms!

Once in Rockland, we stopped to visit the Farnsworth Museum of Art to see the Wyeth exhibits, and the other artsy stuff. Nice museum. 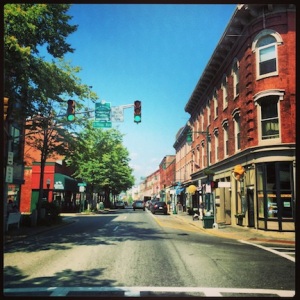 Getting some culture @ the Farnsworth Museum of Art

Getting some culture @ the Farnsworth Museum of Art

The RV Park we ended up at for the night was interesting. Nice location and woodsy setting, with a killer coastline view from one of the walking paths. They also had a gigantic movie screen with huge booming speakers, set up in a field near our campsite. 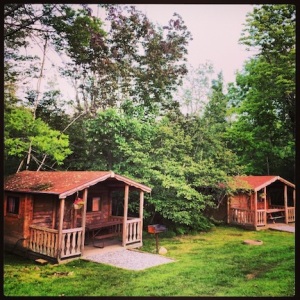 Cute cottages for rent at the RV park. 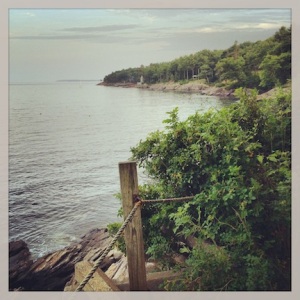 Coastline view from the RV park.

At around 5:00 pm, they had a movie playing, with the sound turned up to about 12. Even Spinal Tap’s amps only went up to 11. This was freakin’ loud. Annoying things come in many forms!

At least the movie was over by 7:00 pm, and we had a good night’s sleep after all.