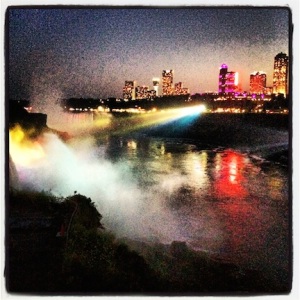 Niagara Falls, all lit up!

On our morning dog walk in Squirrel Hill, we stopped at the drug store up the street and purchased an electric fan. This would end up being one of our finest purchases as we travelled in warmer weather.

We said goodbye to our friends, and headed out of Pittsburg. Mark had assigned me two duties….#1 was to deal with AT&T on the phone regarding our service. That was real pleasant, as you can probably imagine.

My other assigned duty, was to look for Sasquatch in the woods off the side of the highway. I thought this was a dumb thing to be assigned to, because Sasquatch lives in the Pacific Northwest. 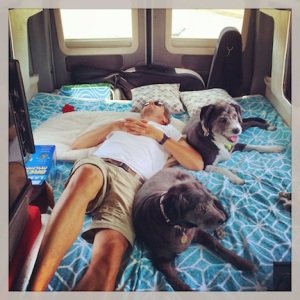 I gave myself a third and final duty, and that was to keep an eye on Mark’s driving speeds. Mark had dubbed FIONA Fast In Our New Airstream, instead of Fun In Our New Airstream. I was getting tired of nagging him about his speed, but there wasn’t anyone else around to do it, so I had to.

What I do remember was the freakin’ gigantic iced tea to-go that I got on the way out. It barely fit in the cup holder, and was so heavy that I could barely hoist it up to take a sip from the straw. I did the best I could with the large iced tea, trying to avoid lifting it in such a way as to aggravate my tennis elbow.

Our lucky ticket (NOT!)

Why is the info we need on the atlas, always right on the spiral binding seam?!

Our drive continued, through Buffalo, past the Peace Bridge (which takes you to Canada), and right on up to Niagara Falls. When we arrived at Niagara Falls, it was already dark out, which was fabulous, because we got to see the Falls all lit up at night. Very cool site to see!

We drove back to the KOA Niagara Falls for the night, and looked forward to the next day, when we’d cross into Canada to see the Falls from The Great White North side.