When in Louisville, one must do the obvious…..go to Churchill Downs, and, eat a Louisville Hot Brown.

We began the day with a visit to Churchill Downs & the Kentucky Derby Museum.  The 360 degree film that’s shown in the museum theatre was fabulous, so be sure to watch it if you go there! And be sure to gawk at how tiny the jockey’s outfits are that are on display. We’re talkin’ about some tiny peeps! 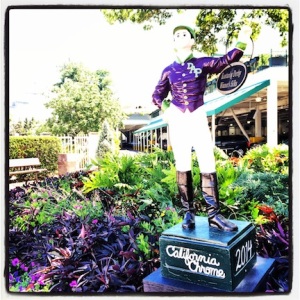 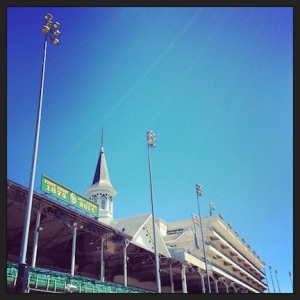 When we had finished going through the museum, and taking the mini tour of the track, we ate lunch in the cafe. At the instruction of Mark’s cousin Susanne, we ordered the Louisville Hot Brown. She told us that, while in Louisville, we HAD to have one. It’s a tradition kind of thing, an epic food thingy that we had to try.

We obliged Susanne, and ordered the Louisville Hot Brown. All I can say is, once is enough. That is one mass of heart attack inducing food that I do NOT ever need to have again. Don’t get me wrong, it tasted good, but, holy moly…just NOT good for ya! Bread, turkey, bacon, and massive amounts of cheese. 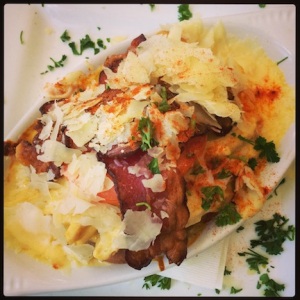 Besides the Louisville Hot Brown, the other thrill of the day was seeing our first Ikea of the entire trip! We are total Ikea junkies, and were thrilled to see one as we drove through Westchester, Ohio in the afternoon. Didn’t need anything, so we didn’t stop in. But we felt at peace, knowing that one was right there!

Our ultimate destination on this day, was Jackson Center, Ohio at the Airstream mothership! We’d made a service appointment months ago, knowing that we’d be going through Ohio. And the day had finally arrived. Well, the day would arrive tomorrow, but we finally arrived there, happy that’d we’d made it on time! 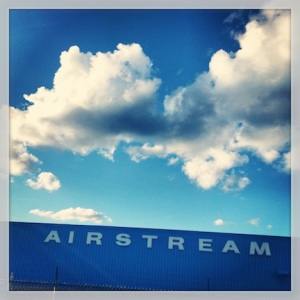 Fiona, docked for the night at the Airstream Terraport.

We had a fun time looking at the amazing collection of classic Airstream trailers on the property.  A way cool site to see!

Found an ATM machine in the town of Jackson Center.

This would be Day #2 at the Airstream factory service center. We were having some warranty repairs done, as well as having a couple things tweaked especially for us.

Just like the day before, we brought Fiona into the service center at 7:00 am….and sat and waited. Today was better though, ‘cause we spent more time hanging out with the people we’d met the day before, who were also there having service done on their trailers and motorhomes.

Besides the hanging out and socializing, two amazing things took place on this day. One good. One bad.

Good things first….I got to go on the daily 2:00 factory tour, while Mark stayed in the lobby with the dogs. The tour was really cool. Airstreams are, for the most part, hand built. It was inspiring to see all the craftsmanship that goes into building an Airstream trailer. They are shiny things of great beauty!

Start of the factory tour!

(Side note…the only photos allowed on the tour are at the start of entering the factory, and of the water testing.)

And then the bad…the tragic event….That evening, while camped once again at the terra-port with some of our new friends, I discovered that the service guys had completely broken the neck of my guitar into two pieces! WTF???!!!

They had had to empty everything out of the back of our motorhome, in order to do some electrical work. And somehow, they must have either stepped on my guitar (it was in a soft case), or put something heavy on top of it, and blammo…disaster! You’d think, either way, they would have noticed. Go figure.

Well, I was pretty bummed about my newfound lack of a guitar to play. But I was also relieved that it was just a cheap travel guitar. So, no expletives were flying, and no steam was coming out of my ears, and no verbal threats were issued.

I had another beer, and would deal with the guitar in the morning. 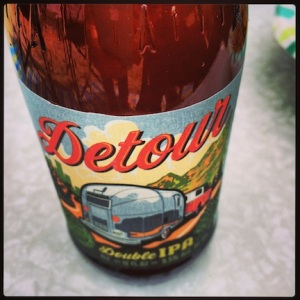 Great beer with Airstream trailer on the label.

Mark and Trixie, lounging in the Airstream service center lounge.

We woke up early, and registered at the Airstream service center at 7:00 am for our service appointment. Fiona was whisked away to a service bay. She seemed almost happy to be home, surrounded by her kin.

And then….we sat and waited.

The Airstream mothership is kind of in the middle of nowhere, although the people who live in Jackson Center probably wouldn’t like to hear that. Our “nowhere,” is their hometown. I should show more respect!

We spent all day hanging out in the service center lobby. I wasn’t feeling great, so I spent part of the day horizontal on a couch, snuggled up with Trixie. Mark got a break when he left to take the daily 2:00 factory tour.

There were a number of other Airstreamers hanging out, just like us. At the beginning of the day, we all kept to ourselves. All of us were trying to work on our computers. But, as we all discovered how bad the internet connection was, one by one, we came up for air and actually started talking to each other…just like in the olden days…the pre-stranger-danger era…the pre-computer-addict-era.

At 4:00, we drove Fiona out of the service bay, and back to the Airstream terra-port for the evening. She’d need another day’s work done on her, so we’d have to repeat the same routine the next day.