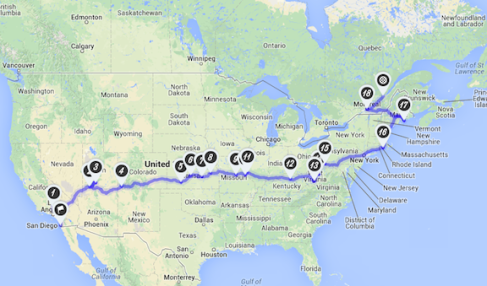 We’re planning a big cross country RV trip for the summer. Our main destination is the Newport Folk Festival, in Newport, RI.

I’ve always been into music. When I was in college, it wasn’t unusual for my friends and I to drive three or four hours to see a concert…Bruce Springsteen, George Thorogood, The Grateful Dead. They were all worthy of road trips, even if some of them were during finals week. Fond memories, every single one of those rogue concerts with my college buddies!!

And so, it probably won’t surprise most of my old friends, that I bought tickets to the three-day Newport Folk Festival, a mere 3,500+ mile road trip, depending on what route we take.

Mark and I started planning our driving route, by agreeing on two things:

1. We want to avoid the southern parts of the country, where it will be the hottest in July and August.

2. We want to travel through as many areas and states as possible that we’ve never been to before.

With those two points settled, we began prioritizing the things we want to see and do along the way to Rhode Island. Zion and Bryce Canyon, in Utah, are top priorities, as is Mesa Verde in Colorado. After hitting those major sites, I’m referencing the book, “The Most Scenic Drives in America,” to try to link together some of the suggested drives along the way.

For a brief moment, Mammoth Cave, in Kentucky, was on our “to do” list, but really, why would I, a self-professed claustrophobic, drive a bunch of miles out of my way, to go to a bunch of caves that I would then refuse to go down into? We’ll see. Mark loves that s%#^, so, we might just make a last minute detour when we get over to that neck of the woods.

We’re also planning a different, distinct return route, by first, heading north to Acadia National Park, in Maine. While we’re up there, maybe we’ll just keep going to New Brunswick and Nova Scotia. Then we’re oh so close to getting to Newfoundland, but not really that close, but kind of close. Well, you can see what the problem is. There’s just so many places to visit!

We’re exploring heading back west through Canada, dropping down into North and South Dakota, across Wyoming and Idaho and into Oregon, then down through California until we’re back home in San diego. Simple! Approximately 4,400 miles…..each way!!!

This morning, while discussing our route, Mark asked,

“Are we gonna drive through the Catskills? ‘Cause I want to see what kind of skills the cats have.”

Wow. So, now you can see what I’m dealing with and why planning this trip may get a bit complicated!

And so, dear readers, I have to ask you, have you ever been to the Catskills? Do the cats there really have special skills? Are there other parts of the US and Canada that you’ve been to that you love and would like to share? Please drop me a comment. All suggestions are welcome!