We could’ve driven all the way home to San Diego today, but we made the strategic decision not to do so. We decided it’d be better to drive to Palm Springs for the night, and drive to San Diego the next day. That way, we’d avoid driving into San Diego during rush hour, plus, in the morning, at the RV park in Palm Springs, we could dump our holding tanks one last time.

So, not being in a big rush to leave Sun City, we went on a big dog walk/photo excursion around Sis and Rick’s neighborhood.

Big cactus are cool too

Things are so neat and tidy in Sis & Rick’s neighborhood

Just as we were ready to hit the road, and were saying goodbye, Mark noticed an old steel bicycle in Sis and Rick’s garage. Next thing you know, that stupid old bike was coming home with us. First I protested, but then, it seemed that the mere idea of owning the bike was bringing such joy to Mark, that I gave in, even though I had no doubt that the bike would become a money pit!

And away we went…back to having three bikes again.

Sometime around 4:30 pm, we rolled into Palm Springs, and headed straight to the Happy Traveler RV Park. 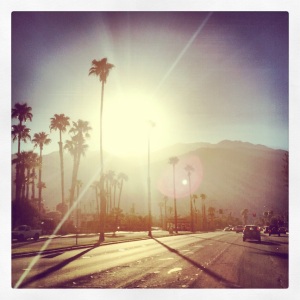 We were tempted to walk into town to get some dinner, but instead, on our last night on the road,  we opted to just hang out with the doggies and the Space Shuttle. We made dinner, drank beers, and played music….one last time!

The last couple of beers from our stop in Santa Fe

Great name for a beer! And a “must” to bring along if you go camping or glamping like us!