We were catching the ferry to Newfoundland today.

And one more thing, the pronunciations. The accent is on the last syllable of each of these names. NewfoundLAND, LabraDOR. It’s kind of odd and took a while to get used to it, but hey, if you’re gonna go there and talk to anyone while you’re there, you should at least learn how to pronounce the name of the place.

Moving on….we had our ferry reservation, and we arrived the required two hours prior to sailing. This meant a lot of “hanging around” time at the ferry terminal.

Fiona, in line to board the ferry 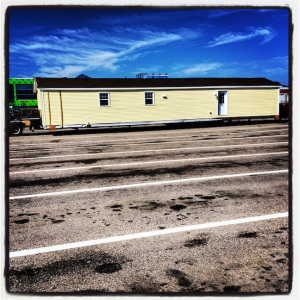 Somebody’s house is also in line to board the ferry

The two hours passed surprisingly quickly. Upon check in, the staff measure your rig from the very tip to the very toe. Fiona was 27’ long from the front to the back end of the bike rack. To be even more exact, Fiona was $258 CDN long!

The rest of that time “hanging around” was spent walking the dogs, and talking to all the other hanger-arounders. We met a bunch of nice people, including other RV-ers, other dog owners, and a truck driver from Newfoundland who was bringing home a little corgi puppy to his kids!

We finally loaded onto the ferry. While Mark was finishing up inside the rig, getting the doggies comfortable, one of the crew was nice enough to snap a photo of me next to the rig.

Into the belly of the beast 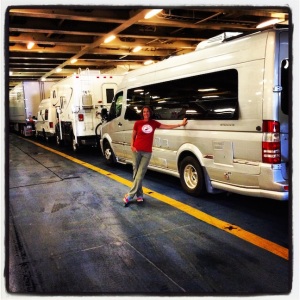 This would be a six hour ferry crossing. The dogs had to stay in the RV, and we weren’t allowed to check on them. Access to the vehicle decks was strictly prohibited. Really, all we could do was set up their water bowl, and open up some windows, turn on the roof ventilation fan, and then try not to worry about them.

Our crossing was nice and smooth, for which I was quite thankful. I’d heard that it could go either way.

Taking photos on the ferry

The shadow versions of Mark and me

Before we knew it, we arrived in Port aux Basque, Newfoundland. 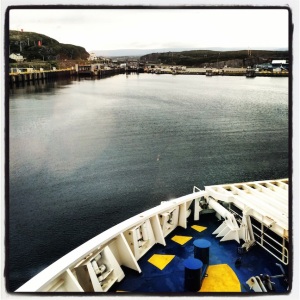 The trucks unload off the boat first

We stopped at the visitor center to pick up a bunch of info and a map. Not that you can get lost, as there’s pretty much only one road around most of the island. But it was helpful to see where everything was.

It’d been a long day and we were tired, so we stopped for the night at nearby J.T. Cheeseman Provincial Park. I enjoyed an evening music jam session with Keith and Marilyn, a couple from Alberta that had also just come over on the ferry. Our visit to Newfoundland was already starting out with a bang!