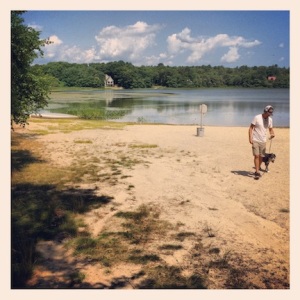 Morning walk around the campground. Just south of Plymouth, MA

Morning walk around the campground. Just south of Plymouth, MA

We were very excited to go to Plymouth today to see Plymouth Rock….the first place that the Pilgrims landed in America. And so, it was with great disappointment that we found Plymouth Rock to be, #1, quite small, #2, locked up in prison-like confinement, and #3, apparently part of the Great American Hoax.

Most people know about the supposed first steps on the moon…Neil Armstrong, and all that…”One small step for man, one giant step for mankind.” (or something like that). I say “supposed” because, according to some conspiracy theorists,  there’s still some question as to whether or not we really landed on the moon.

Well, it ends up that there’s no mention of Plymouth Rock in any of the historical documents, and that the statement that the Pilgrims had landed there, was uttered 100 years after the fact, in some speech. 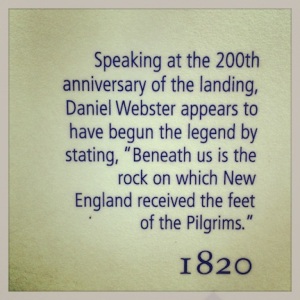 So it seems that the whole Plymouth Rock story is totally fabricated. Which doesn’t explain why the folks of Plymouth, Massachusetts have gone to such great lengths over the years to move, repair, and protect behind walls and bars, Plymouth Rock.

All this, and, we still enjoyed ourselves, and took lots of pics of the rock!

We took a stroll around the waterfront, and around the town of Plymouth…all very quaint and beautiful. We found Leyden Street too….the oldest street in the US. 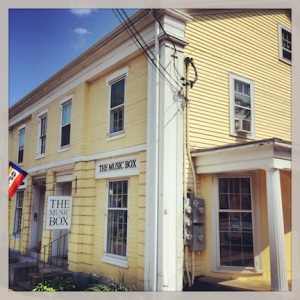 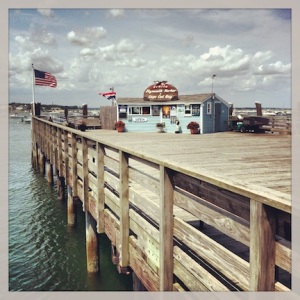 Our little snippet of American history complete, we then took off on a mission to find a new guitar for me, to replace the guitar that was broken in two by the fine workmen at Airstream.

I was so lucky to find a gem of a music store, about 20 minutes from Plymouth. Tucked away in a little strip mall, was Music Unlimited. Turned out to be a fabulous shop, with all kinds of beautiful Taylors and Martins.

But, I was focused on finding a really cheap guitar. And I did. I bought a 3/4 size Ibanez, for $100. Sounds ok, weird to play since it’s 3/4 size, doesn’t completely hold it’s tuning. It’s upside…it was only $100, and because it’s small, I can play it while standing in the aisle of the Space Shuttle!! The hoedown is on!!!

The day’s finale….another fine feast at our campground.